Within the chairmanship, which has equal representation, he will steer the expertise of the committee together with a representative of the schools, thus making a crucial contribution to the improvement of the education infrastructure in Rhineland Palatinate.
Steuler Group

This year’s annual conference of the Regional Working Committees (LAG) took place in Höhr-Grenzhausen at the end of June. 160 representatives of the region, different branches of schools and local industry met at the “rendezvous”, which this year was held with the theme “‘Ensuring educational success’ - Youth Environments and Vocational Orientation”. The list of participants included names such as Doris Ahnen (Minister of State in the Ministry for Education, Science, Further Education and Culture) and Dr. Gerhard F. Braun (President of the Regional Association of Entrepreneurial Associations). They were joined by leaders of the individual regional working groups, representatives of chambers and associations, as well as representatives of many schools in the State in order to discuss hot topics in the interaction between schools and industry.

Today, there are 35 regional working groups in Rhineland Palatinate. Two of them are led by Tanja Demko (head of human resources at the Steuler Group). In discussions in the Rhein-Lahn district and around Montabaur, she is actively involved in the interaction between school and industry.

Since the establishment of the Rhein-Lahn School and Industry Working Group in 1998, there have been some positive developments in the education infrastructure: contact with and interaction between schools and the local economy has improved considerably, an exchange of information and experiences has been actively promoted and understanding and mutual acceptance have been boosted. Numerous exciting projects (e.g. industrial training placements for teachers), workshops and seminars have been initiated and contribute significantly as before to a successful co-existence.

Regional working groups are seen as voluntary working groups and promote the interaction of teachers and industry representatives at a regional level. From an organisational perspective, at regional level they are incorporated into the Rhineland Palatinate School and Industry Regional Working Committee in Mainz, which is supported by the Landesvereinigung Rheinland-Pfälzischer Unternehmerverbände e.V. (LVU) and assisted by the Ministry for Education and the Ministry for Economic Affairs.

The regional working groups of all federal states work together within the National School and Industry Regional Working Committee (BUAG). This is supported by the German Institute for Economic Research (IW) and the National Association of German Employers’ Associations (BDA). The BUAG promotes and coordinates the work of the regional working committees in the federal states, carries out projects and organises its own further training courses.

Michael Steuler has held the position of Chairman of the School and Industry Regional Working Committee in Rhineland Palatinate since June 2014. We wish him every success in his role! 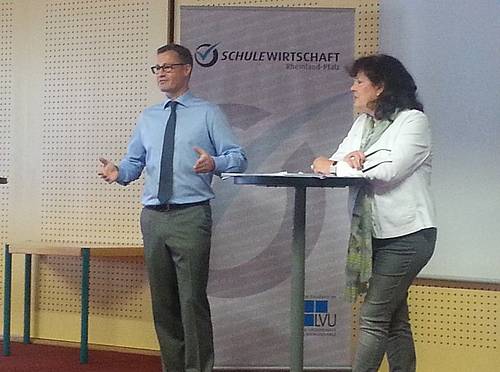