Despite the tight schedule and additional impediments due to the COVID-19 crisis, the project team managed to hand over the completed quench tower to the client on the agreed completion date of the 14th of April 2020.
Linings

A repair performed on the refractory brick lining allowing the GRP process vessel to continue operating on an interim basis convinced the plant operator SUEZ in the spring of 2019 of the Steuler Surface Protection Lining team‘s competence, leading to STEULER-KCH being awarded the follow-up contract „Construction of a new flue gas quench tower Q-3000“.

The scope of work in the order encompassed the (externally commissioned) fabrication of the process equipment, manufacture of the chemical, thermal and mechanical stress-resilient lining system by the Steuler factories in the Westerwald, transport of the rubber-lined vessel and lining material to the building site and performing the installation work in multiple shifts.

In constructing the process equipment, a conscious decision was made not to use GRP, but to construct the 10-metre-high and 2.4-metre-diameter quench tower out of steel, which was then lined with soft rubber  at the STEULER-KCH rubber lining workshop and vulcanised in our own autoclave.  In accordance with the client‘s wishes, the exterior was painted in SUEZ blue.

Due to the tight timetable, it was decided not to ship the tower to the construction site with the refractory lining already fitted, as has been the practice on many other projects. Instead, the lining, comprising acid-resistant ceramics and carbon bricks, was installed working in two shifts under the supervision of the STEULER-KCH Assembly Department on the SUEZ factory site.

During the downtime, the old GRP tower complete with brick lining was sawed up and removed from the foundation. STEULER-KCH technicians then renovated the foun-dation in compliance with the WHG (Water Resources Act) by applying an approved coating and then cladding with extruded ceramic tiles bedded in and grouted with synthetic resin mortar.

The vessel, which in the meantime had been almost fully lined, was then lifted into the plant with a heavy-duty crane, positioned on the foundation and fixed in place. The final job was to complete the connection between the lining and the downstream equipment.

The new flue gas cooling tower meets the high quality standards we set internally and expected by the customer, and is superbly equipped to deal with chemically aggressive agents, such as hydrogen fluoride and hydrofluoric acid, in conjunction with large temperature shock stresses.

During the course of the tightly scheduled six-month project, the experienced project team composed of project managers, purchasing, project assistants, the rubber lining workshop, design, manufacturing, shipping and installation departments, communicated all the important details with each other digitally via Microsoft Teams. This total transparency for all those involved, including with respect to the client, doubtless contributed to the success of the half-million euro project.

Dr. Rico Kanefke, CEO of SUEZ Sonderabfallgesellschaft mbH posted the following comment on LinkedIn about the work performed by the Steuler Team: „[…] It was great work under difficult circumstances. Your team was exceptional! Thanks to all.“ 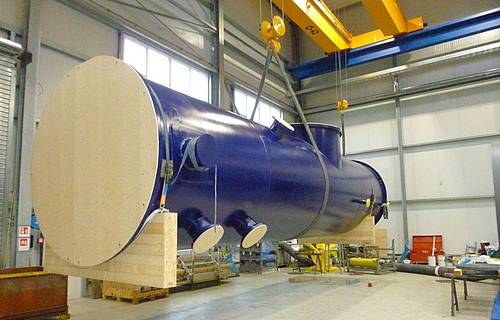 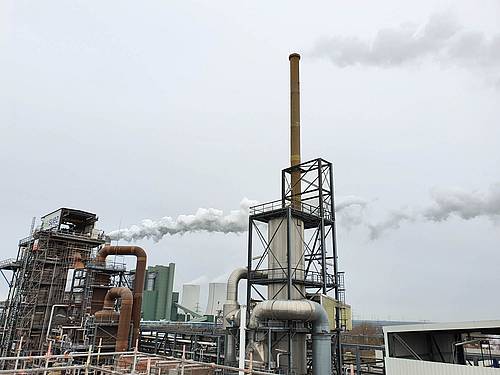 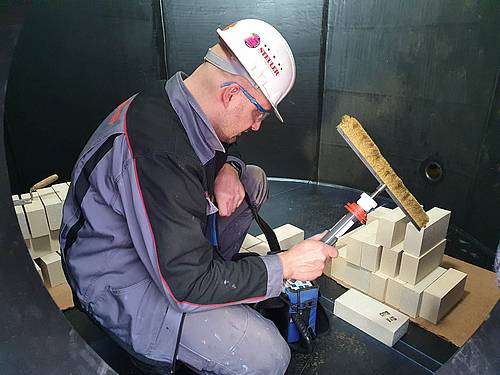