“Feuerfest und wasserdicht” (“Fireproof and Watertight”): this is the title of a production by SWR which is currently being filmed in Höhr-Grenzhausen and Siershahn. As part of the “Made in the Southwest” series of shows, a 30-minute documentary is being produced about the Steuler Group.
Steuler Group

The programme will be broadcast on Wednesday, 19th November 2014, at 6.15 p.m. on SWR. The name of the film is based on the materials that Steuler manufactures and processes.

The filmmakers are spending eight days filming at the company’s sites in Höhr-Grenzhausen, Siershahn and Mühlacker (near Stuttgart) and are also shooting at Steuler construction sites and at a trade fair, as well as visiting various customers. The film includes comments from department heads, machine operators, construction supervisors and company directors – specialists, unusual characters, genuine “Westerwalders” and experienced professionals.

The first scenes are in the can and it promises to be a really exciting film. All of the actors are “genuine” Steuler employees, who will give viewers extraordinary insights into the Steuler world.

Four “main actors” receive special attention, in much the same way as the national football team, whilst the other actors are followed by the cameras authentically at their workplaces, where they “give away a few secrets”. The film also includes wonderful shots of the production facilities – sometimes artistically backlit, with exciting details and lots of action. Among other things, a cameraman ventured onto a crane, let himself be driven around the production hall in the cage of a forklift truck and scaled the highest silo. The film provides an unfamiliar view of the historic factory building from above as well as going behind the otherwise closed-to-the-public Steuler curtains. 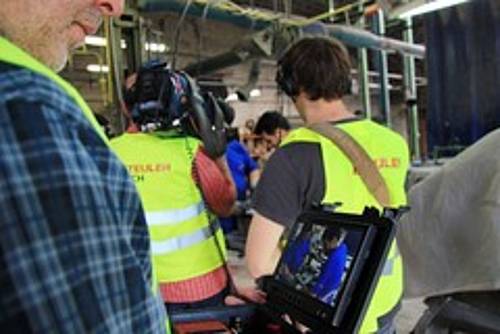